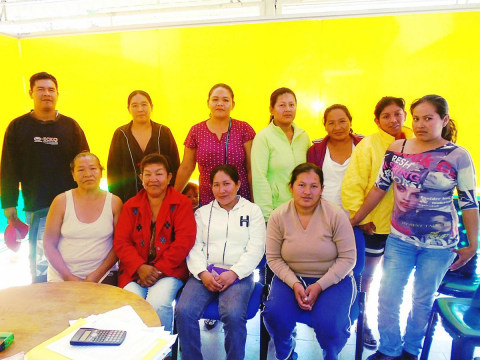 A loan helped to buy an industrial oven to change her domestic oven and continue working with her traditional bakery.

Luz is a 35-year-old woman. She lives with her partner and has one son aged 8 years. Her business is making traditional bread. She is a good mother and is enterprising, sensitive, sincere, understanding, responsible and very hard-working. She runs her business in the 'Cotoca' area which is to the east of the city and is renowned for its traditional production of jelly and molasses (both made from cane sugar) as well as baked products made of corn and cassava, such as 'sonso', 'roscas' [ring doughnuts], 'arepas' [corn tortillas], cuñapés and 'bizcochos'. The area has a warm sub-tropical climate with a temperature which varies between 21 and 35 degrees centigrade during the day. Luz is olive-skinned with brown eyes and long chestnut-coloured hair which she wears tied behind her head. She is of short stature. Her mother tongue is Guaraní which she speaks among the family and she speaks Spanish for general culture and for the business she does. She shares her life with her partner who makes a living from transport, and with her son who goes to school. They live in her parents' house, built of wood with a sheet metal roof and earth floor. It has electricity and water from a well, extracted by pump. It does not have a sewer connection. (She is in the centre of the photo wearing a red blouse with white flowers.) Due to her need to improve her financial situation she set up a communal bank of people with businesses such as installing solar panels, selling seed for sowing, ceramic handicrafts, making 'sao' straw hats, selling second hand clothing, selling natural medicines, selling food, making fabric, hairdressing and selling cheese, in order to ask for a loan and improve their businesses. Her business is making and selling traditional home-made bread such as 'Cuñapé' (small rolls made of cassava flour with cheese), rice empanadas (baked from rice and cheese), 'Zonzo' (cassava puree mixed with cheese and shaped on a stick), wheat 'bizcochos' (little hard rolls made from wheat flour) and other items. She does her work independently in a room set up as a kitchen to bake in her home. "I set my business up quickly, with a small domestic oven and borrowing flour, eggs and lard from my neighbours, because my son had already been born and I needed to work" she says. The advantage of her business is that she has daily sales; the disadvantage is the lack of capital to buy an industrial oven to replace her domestic oven. Her dream is to open a complete bakery inside a market. She wants to expand her business by buying an industrial oven to change her domestic oven and continue with her business. This is the fourth loan cycle with the institution in the 8 years she has been doing this work. These are the reasons why Luz is asking for a loan to change her domestic oven and continue working with her traditional bakery.