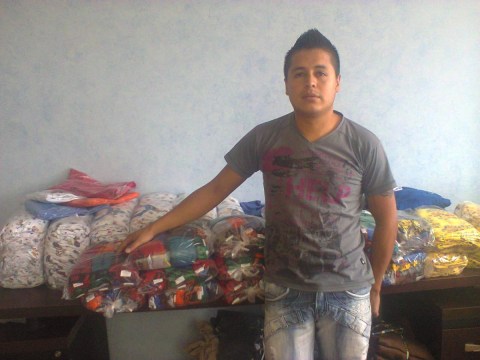 A loan helped to invest in more merchandise such as pyjamas and undergarments, this way he can be ready for the student season.

Jhon is a 28-year-old man, he is very hardworking, he left his house in the Carchi province at 18 years old to have a better quality of life, since then he has been renting a house in the city of Ibarra, he is single and doesn’t have any children. He has made a living selling clothes for approximately three years, he started this business as his own endeavour. He works in a textile factory where he can access goods at a lower price than they would normally cost, as an employee of the factory Jhon sees many clearance sales on clothes, he takes advantage of these sales to increase his inventory and have a wider range of products at the fairs he attends. He sells his products at the Otavalo, Tulcán, San Gabriel and Ibarra fairs, where he sells them on the street. With the loan he will invest in buying children’s pyjamas and undergarments that he will get at a good discount, Jhon would like to invest by increasing his inventory and being ready for the season beginning in October, when peak season begins again. He thanks KIVA for the help they offered him.