Go green for Earth Day! Sign up to lend monthly, get an extra $50 to lend. 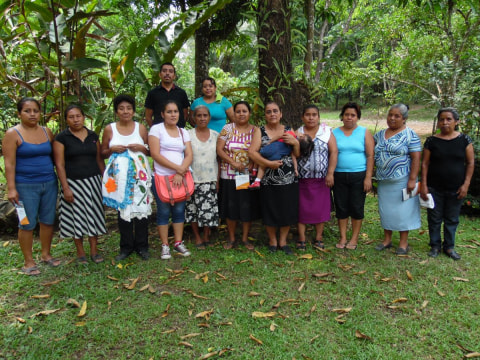 The Musaenda group lives in a community in Vera Cruz that is located among hills, sugarcane fields, rubber trees, lemon groves, orange groves, and exotic fruit trees like ‘yaca’ [jackfruit]. The members of the group and their business activities are Leoba, who sells napkins and vegetables; Pascual, who sells candy; Liliana, who sells food; Margarita, who sells tortillas; Antonia, who sells clothes; Deysi, who sells gold and silver items; Senobia, who sells cosmetics; María Salome, who sells typical food; Eva, who sells clothes and food; Bárbara, who sells shoes by catalog; Elvia, who sells costume jewelry, containers, and food; Lizbeth, who sells by catalog; and Joel, who provides maintenance to computer equipment. Joel lives with his parents, and he is single. He has a lot of goals in his life. From Monday to Friday he works at an elementary school in a nearby community. He is in charge of the administration of the school. The enjoyment that he gets from technology and the desire to improve himself led him to work in his business, which is repairing and maintaining computer equipment. He remembers that eight years ago he repaired the first computer. “The machine was a lost cause. They had told my customer that it would no longer work, and I fixed it. From then on I fix between two to five computers a month”. He has noticed progressive advancement in his business activity. Thanks to his earnings, he will start selling items for computers. He will use the loan to buy USB devices, fans, speakers, screen wipes, and screen protectors. These are the items that are most requested by some of his customers. With the profits that he gets and with his salary he supports his parents with the household expenses, pays for his personal expenses, and buys the tools needed to continue working. Joel is eternally grateful for the opportunity of the loan just as the whole group is. His business activity increases, and some of the members have started new business activities. *The photo was taken on Leoba’s patio. She is showing the items that she embroiders. Joel is the only man in the group.