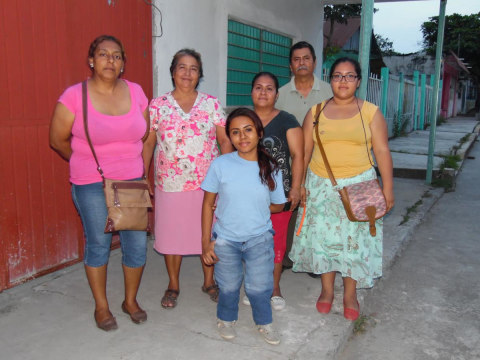 A loan helped to purchase eye drops, soap and lotions.

What is now today a small city was only a short time ago a rural district. The development here is thanks to the railway system whose job prospects which attracted a lot of people to the area.

Don Luis, or Güicho as his friends call him, is a hard working and dedicated family man. He is a single father of six children, five of whom are now adults. Don Luis works all week and keeps his same locale thanks to constant business and, in his words, "the desire to get ahead and to think things through is what has helped me run my business until now."

He began selling natural products in 1985 and he has not stopped since. When he began his business, he sold his wares by organizing them on a rug on the ground, but he has since been able to invest in a table and shelves that help him display his products.

Don Luis has invested previous loans in purchasing more natural medicines like pills, soap, oil, eye drops etc, depending on the needs of his clients. They always come to him for the superior variety and best pricing around.

He would like to use this loan to purchase eye drops, soaps and lotions he needs for his business. He also wants to open a more formal establishment in this area of the city. *The photo was taken on the street in front of Doña Braulia's home. Don Luis is the only male member of the group.