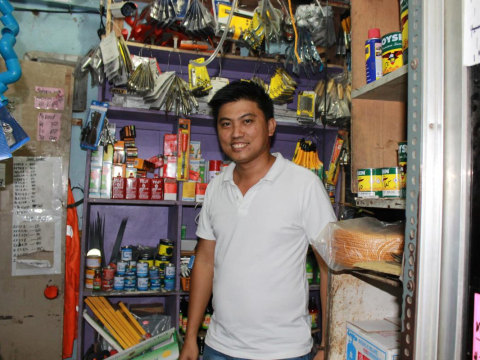 Bryan's loan finished fundraising, but these other borrowers need your support

A loan helped to buy paint, pipes and brushes, cement, steel, nails and other hardware items to sell and deliver to his customers.

Bryan is 33 years old with three children. His wife is helping him with their business of wholesale hardware store and grocery store.

Bryan has been accustomed to hard work since he was eight years old. Living in the province with his grandmother in a poor life status, he learned to sell rice cakes and vegetables after school. As a teen he experienced working as an eggs, crackers and fish ball vendor and worked as a janitor in a mall to earn a living. Bryan dreamed of having his own business someday so he saved most of his earned money and he used the rest to support his grandmother in the province.

Bryan's business opportunity came to life in 2004 when he roamed the market in their community and took orders to deliver cooking oil and condiments (vinegar, fish sauce and soy sauce) from his savings of PHP 5,000 and from there on his business grew. He was taking more orders and delivering his goods to most of the local store areas in their community.

But like most businesses, Bryan also experienced a downfall in 2007 when his family became sick and frequently hospitalized so he spent most of his income and capital to finance the expenses. Together with a bad partnership, his business went bankrupt.

Instead of giving up, Brian tried again using what was left of his money. He roamed his community for orders, this time asking for hardware and grocery orders and delivered them to their doorstep. He delivered them himself, oblivious to the backbreaking work of carrying heavy packages for his customers and working seven days a week.

Bryan now has four branches of his wholesale hardware and grocery store with 17 employed helpers. He is now earning a net of PHP 300,000 a month.

Bryan shared his blessings with his community not just by being a good example but by supporting five of his employees for their education and working for six hours. He also supports his employee’s 11 children with their school expenses through scholarships.

Brian's customers continue to grow and more orders are piling up but he is unable to provide goods and deliver without additional capital. Brian is now requesting a loan amounting to PHP 150,000 to buy paint, pipes and brushes, cement, steel, nails and other hardware items to sell and deliver to his customers

Brian wants to expand his wholesale hardware and grocery store to provide a better future for his family and help his community more with employment.