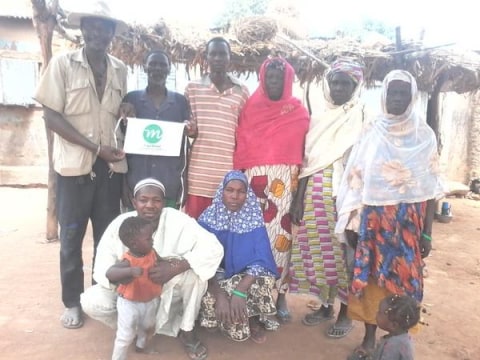 Mamadou's Group's loan finished fundraising, but these other borrowers need your support

A loan helped to purchase a packet of OPV seeds and some fertilizer for growing corn.

Mamadou, appearing at the left in the second row and wearing a big hat, is a member of a group of ten farmers signed up with myAgro. They live and work in the village of Samanko, southeast of Bamako, in Mali. He is 67 years old and the father of eight children, aged 15 to 46, of whom six are currently in school. Mamadou is rooted in the family tradition of farming, the main source of income and of food self-sufficiency at home. Thus, he was encouraged to do this work, as well as for the love of farming, for 67 years now. He grows corn on his parcel of land. But, as a farmer, he must cope with difficulties, such as the lack of rain and farm supplies. Mamadou is starting his first year with myAgro and signed up because of the quality seeds and the possibility of increasing his yields through the services offered by myAgro. This year, he is making payments to purchase a myAgro packet of OPV seeds and some fertilizer for growing corn, so as to increase his yields on his parcel of 0.5 hectare. He has been growing corn for 47 years for its productive and market advantages. With greater yields and higher income, Mamadou is planning on diversifying his crops and purchasing some farm supplies and equipment. Ultimately, he also hopes to be able to ensure his family is self-sufficient in food.