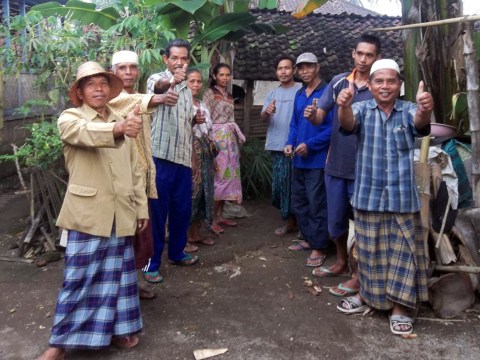 A loan helped To build Bio-digester and utilization of biogas residue (Bio-Slurry) as organic fertilizer.

These are the members of “Lembah Rinjani” Group who is posing in front of a cow cage. The Group is led by the 50 year-old farmer Mahrum, who is standing in the front right, pointing his two thumbs up and wear a white religious fez at his head. The other farmers in the group are Ipin, Kamrun, Uki, Halil, Mahrip, Santun, Muh, and Azwan. Because Halil and Mahrip were unable to attend at photo-taking process, they were represented by Inak Ati (Halil's wife) and Zubaidah (Mahrip's wife). Both of these women have agreed to be displayed on Kiva. All of them live in a small village in East Lombok District, Lombok Island, Indonesia. Mahrum has a family with four children. He also is a figure of religious and member of community society in his village. Mahrum has high hopes for his family and he strives to improve his economic conditions. In 2006, after he returned from Malaysia, he was concerned to see many of the poor farmers in his village. He run a small scale vegetable farming and established a farmer group. His business runs well. Two years ago, he bought some beef-cattle which he fattened for resale. However, he was troubled with the high price of chemical fertilizers. He also concerned to see the cow dung was wasted without further processing and it started to pollute the surrounding neighborhood. After socialized by YRE and Yayasan Mitra Membangun Masyarakat Sejahtera/YM3S (a local foundation – biogas construction partner of Yayasan Rumah Energi) about Household Biogas (BIRU) program, Mahrum saw the biogas program is a solution of his problem. He saw opportunity to reduce his dependence on non- renewable cooking gas. In addition, he also wants to use bio-slurry (biogas residue) as organic fertilizer for his plants or sell it to increase revenue. Mahrum feel enthusiastic to purchase a bio-digester, but he does not have sufficient capital for it. A loan from Kiva will help him and other group members to make it possible. He have an optimism that if he can build bio-digester, he can use the bio-gas for cooking, and bio-slurry (biogas residue) as fertilizer for his plantation. He also hopes that in the future, he can invite the whole farmers in his village to use biogas and also establish bio-slurry related business to create a new job opportunity to his surrounding neighborhood.