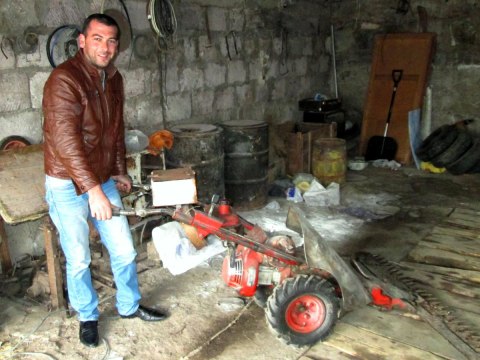 Vardan's loan finished fundraising, but these other borrowers need your support

A loan helped to buy a new hay mowing machine for his agricultural activities.

Vardan lives in the village of Zovaber in Gegharkunik region. Vardan lives with his father, wife, and pretty daughter. He is engaged in farming and agriculture with his father. With his first Kiva loan, Vardan managed to enrich his farm with cattle, and now he has more calves on his farm. He also has cows, sheep, lambs, and chickens. Vardan’s wife organizes their farm product sales such as milk, macun (national dairy product), cheese, and eggs. The sale of meat is Vardan’s father's duty. Vardan also properly takes care of his land, which is rather big; on it he cultivates vegetables and fruits and also gathers from it hay for his farm cattle. Vardan used to have a hay mowing machine with which he worked very quickly, but now it is broken down and it cannot be repaired. With this loan of 700.000 AMD, Vardan will buy a new hay mowing machine for his agricultural activities. Vardan paid back his previous Kiva loan and again has need of Kiva's support. He hopes that this time also he will have it.