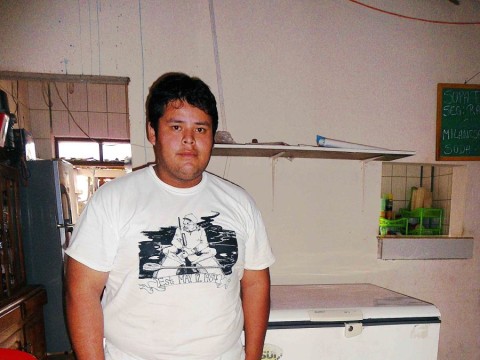 A loan helped to offer tea and coffee service to accompany traditional baked goods, to cover expenses for his baby.

Luís is a 20 year old man, single, with a child. He sells empanadas. He is a good father. He is reliable, enterprising, patient, energetic, responsible and hard-working. He has an ambulatory business in the southern district of the city. This is an area characterized by its fine and silty soil. The climate is temperate and sub-tropical, and the temperature varies between 21 and 35 degrees centigrade. Luís is dark-skinned with short black hair, brown eyes, short stature and a robust build. His native tongue is Guaraní which he speaks at home. He speaks Spanish in the general culture and in his business. He enjoys life with his baby son. They live in a room that belongs to his family. It is built of brick and cement, with a corrugated metal roof. It has potable water, electricity and sewage. His business is selling empanadas such as “cuñapé” (made from rice flour and cheese), the “sonso” (yucca with grilled cheese), “pan de arroz” (bread based on rice and milk), maize empanadas (based on corn flour and cheese), and others. These are some of the traditional baked goods, accompanied by tea or coffee, that help to get through the warm afternoons in the region. He says that sales have grown a lot since he started and that there is always someone who wants a cuñapé and a hot coffee, especially in the winter. His business benefits from the fact that traditional baked goods are very popular and sell regularly. The disadvantage is that he must walk great distances to sell his baked goods. His dream is to have his own store. He hopes to grow his business by renting a kiosk where he can offer tea and coffee service. This is the first loan cycle with the institution in the year that he has been involved in this activity. These are the reasons that Luís is seeking a loan to rent a kiosk, in order to offer tea and coffee service along with traditional baked goods, so that he can pay for expenses for his baby.