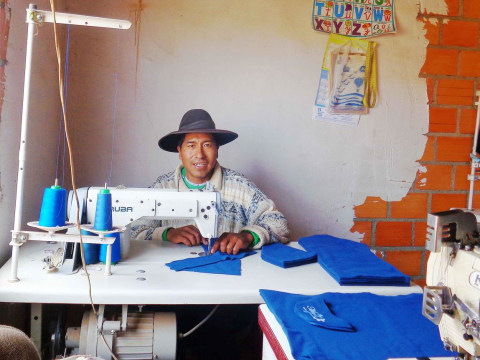 A loan helped to purchase cloth by the roll at wholesale to comply with customer orders and to expand his clothing-making business.

Nelson is a 37-year-old man, who is married, has 3 children (6, 4 and 2 years old), and his business makes sports clothes. Nelson is enterprising, independent, constant, patient, responsible and hard-working. His business is located in the Cruce Villa Adela zone, an area characterized by its connections to various zones of the city, where public transport has stops. From here, people can travel to other outlying zones. The climate is cold, with a temperature that varies during the day between 2 and 14 degrees centigrade. Nelson is dark-complected, with dark eyes and short black hair. His stature is short and he is slender. His native tongue is Aymara, which he speaks among his family, and he speaks Spanish in conducting commerce. He makes course clothing for women and specializes in juvenile sports clothes to sell at wholesale. He has to buy cloth in different colors and textures to make this course clothing for women in all sizes. Also, he takes orders and makes sports clothing for juveniles. His experience in the business began when he worked as an assistant, and later, Nelson became independent and his own boss. He began working with a household sewing machine, which is still functioning. Nelson wishes to expand production, making a larger quantity of items because he has continuing customers who are demanding larger quantities: He comments, “Some three years ago, I visited Brazil and worked as a tailor, acquiring new knowledge and experience, in order to become independent and open my own business.” The advantage of his business is that he can count on fixed and constant customers to sell his clothing to at wholesale. The disadvantage is that he lacks sufficient capital to purchase cloth at wholesale. Nelson's dream is to have a clothing factory and produce on a grand scale. He needs to purchase micro-polar cloth by the roll to be able to comply with customer orders. This is his first loan cycle with our institution in the four years since launching his company. It is for these motives that Nelson is requesting a loan to purchase clothing by the roll in order to comply with customer orders and expand his clothing-making business.