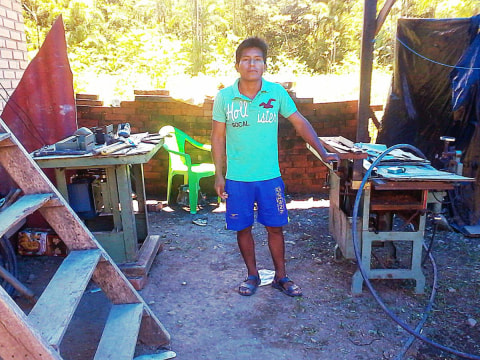 A loan helped To install potable water in his kitchen, bathroom, and laundry room to give his baby a comfortable home where he can grow up.

Grover is a 21 year old man, he lives with his partner, he has a five month old son, and he is a farmer. He is a good father, patient, consistent, enterprising, independent, responsible, and hardworking. His business is located in "Chapare," a rural area that is known for being the breadbasket of the city. In this place they produce the majority of the food that they sell in the city. It is a temperate climate with a temperature that varies during the day between 19º-28º C. Grover is dark skinned, has short black hair and brown eyes, is short, and is thin. His mother tongue is Quechua that he speaks in the place and he speaks Spanish in the general culture and for the business that he does. He shares his life with his partner, who makes a living cultivating the land, and with his baby. They live in their own house that is made of brick and wood with a tin roof that has electricity. To get water, they should go to a stream that is a ten minutes walk. His business is farming. The vegetables that he produces are mainly potato, wheat, quinoa, barley, lima beans, peas, and cereals. He also has a few heads of cattle. "I entered the tropics when I was a kid due to the good harvests. I stay here and want to have basic services," he says. The advantage of his business is that the produce has a high of demand. The disadvantage is that the town where he lives does not have access to basic services. His dream is to have potable water in his house. He wants to connect potable water in his kitchen, bathroom, and laundry room to give his baby a comfortable home in which to live. This is the first sequence of loans with the institution in the four years that he has been doing his job independently. It is for these reasons that Grover is requesting a loan to install potable water in his kitchen, bathroom, and laundry home to give his baby a comfortable home where he can grow up.