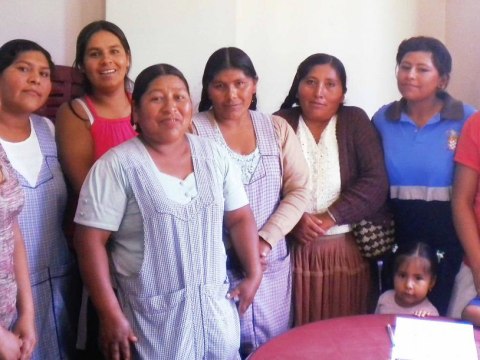 A loan helped to buy a little cart to sell fried chicken at night and have 2 activities.

Herminia is a 33 year old woman. She is married and has 2 sons, aged 9 and 18. Her business is selling organic flax seed juice. She is a good mother, enterprising, independent, stable, has a good attitude, responsible and very hard working. She runs her business in the southern part of the city. It is an area characterized by informal businesses and manufacturing. It has a climate that varies during the day between 18-25 degrees celsius. Herminia has dark skin, long black hair that she wears braided, brown eyes, short stature, and a medium build. She dresses in traditional clothing (hat, shawl and skirt), and her mother tongue is Quechua, which is spoken in the area. She speaks Spanish in the general culture and for business. She is the fifth in the line from the left. She is wearing a skirt with a cream colored sweater and a white and purple checked apron. She shares her life with her husband, who works as a driver, and with her children who go to school. They live in their own house built of Adobe with a metal sheeting roof it has water from an electric well and plumbing. The need to help with her family's household expenses led to her seeking a second work activity and to form a bank of people with businesses such as selling personal hygiene products, selling vegetables, selling bookstore items, selling food, selling breakfasts, selling second hand clothing, and public transportation such as a motorcycle taxi, so that they could ask for a loan and improve their activities. Her business is selling flax seed juice. Flax is a seed from the flax plant. her preparation method is putting the ground flaxseed in a container, adding 1 ½ cups of boiling water, and stirring it with a spoon. She adds lemon juice and lets it sit to add the sugar. Later she fills her thermos and sells it. She sells as a street vendor to merchants and vendors with sales stalls, who are her regular customers. “I started my business out of the need to work. i know the market and its needs,” she remarks. The advantage of the business is that she has regular customers. The disadvantage is the weather changes because she has to get around to find customers. Her dream is to open another business selling food to work in the evenings. She wants to buy a little cart to sell fried chicken. This is her 4th loan cycle with the institution in the 5 years that she has been doing this activity. These are the reasons that Herminia is asking for a loan to buy a little cart to sell fried chicken in the evenings and have 2 activities.