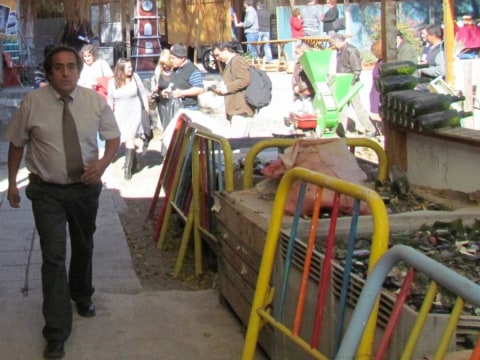 A loan helped to expand recycling capacity and operations to support its health clinic.

Upasol is a social enterprise in Chile’s Elqui Valley that reinvests revenues from recycling services into the only rehabilitation center for people with physical and mental disabilities in the region. It reduces waste, benefits the local environment, and creates a brighter future for the disabled. With this loan, Upasol will in part purchase a truck for collection and transportation of raw materials and recycling products. It will also purchase equipment for improving the recycling process and expanding warehousing capacity. Upasol (the acronym for "Unión de Padres y Amigos Solidarios" - Parents and Friends Solidarity) operates a free collection service for recyclable household goods in Vicuña and surrounding areas. On an annual basis they collect 61 tons of recyclable materials. The collected glass, plastic, metal, and other reusable materials are then sold to local manufacturers for use in their production processes. The recycling revenues cover 75% of the costs of supporting the only rehabilitation facility for people with disabilities in Vicuña. In addition to funding physical therapy, Upasol also generates jobs through its collection service and employs people with disabilities at the center. 4,000 people total benefited from Upasol’s recycling services and rehabilitation center. Upasol brings visibility to both disability and environmental issues and serves as a community hub for resources and social activities. In 1998 when Patricio Santander launched Upasol, there were no services or facilities in Vicuña for children with disabilities. Parents had to take their children far outside of Chile’s Elqui Valley for rehabilitation therapy. According to the National Disability Fund, less than 30 percent of the 2.5 million Chileans with disabilities are employed; in 2014, nearly 50 percent were living in poverty. In remote areas like Vicuña, therapeutic facilities for the disabled are either underfunded or nonexistent. For example, at age six, Paola suffered a cerebral aneurysm as the result of a congenital brain defect. At the time, she was not expected to survive; now, years later, Paola is thriving with support from Upasol’s physical rehabilitation facility. “It is hard in the beginning,” she explains. “But, with drive and motivation, you pull through.” Called a miracle by many doctors, Paola now studies theology and wants to become a youth educator in Vicuña. “I also want to give back to Upasol,” she says. “I am very grateful to the center. It has given me so much.” Limited opportunities exist for people with disabilities to live independently, receive a dignified job, or enjoy social activities. Upasol is trying to change that. For more details, watch this video.