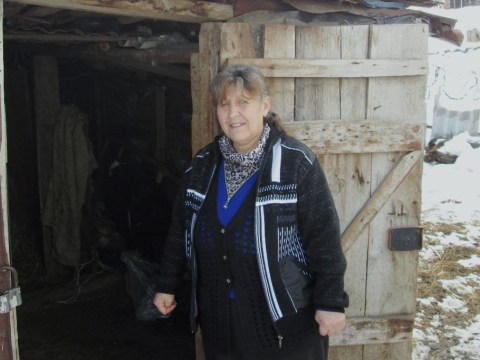 A loan helped to buy a lot of animal fodder for her farm cattle.

This woman’s name is Silva and she lives with her daughter-in-law and granddaughter in Sevan city in the Gegharkunik region. Having no specialty and never having been employed for many years until today, her only occupation is farming in which she now helps her son’s wife. Silva’s farm is not very big but always cared for and cute. Here she takes care of cows, calves, heifers, sheep, pigs, a lamb and chickens. Her farm meat, milk, macun (national dairy-product), cheese and eggs she sells at the city’s wholesale market during the week. Silva says that with coming of spring, she feels stronger and she is sure that this year will be greatly productive for her farm. She has a lot of new plans connected with it and she hopes that in the future, Kiva lenders will have a great function in that, but still she has another request. This loan of 700,000 Armenian drams she asks for, because her cattle lacks fodder and with this money, she wants to buy a lot of animal fodder for her farm cattle until it is time to take her cattle to the pastures.