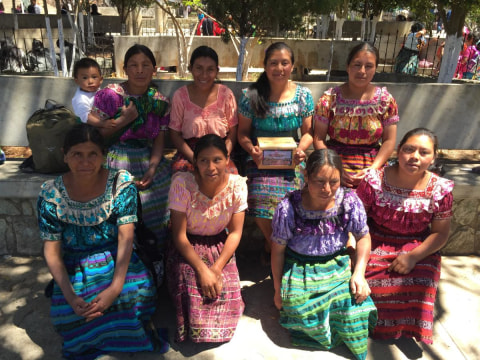 A loan helped to buy the necessary capital to continue producing and selling traditional skirts.

San Pedro Jocopilas is a small community outside of Quiche in the western highlands of Gutatemala. Quiche is one of the most poverty stricken of the country’s 23 departments, with an incidence of poverty of over 80 percent. The department, named after the Maya-K’iche people, has a diverse and complicated history. Most recently, in the 1980’s, violence from the civil war tore through the region, displacing and killing thousands of indigenous people. In San Pedro Jocopilas, eight indigenous K’iche women have joined to form the Friendship Bridge Trust Bank San Pablo. The women, who are finishing their third loan cycle with Friendship Bridge, are applying for another loan to support their various small business. Juana, a 28-year-old member of San Pablo, has been making and selling typical Maya-K’iche skirts for over three years. When Juana started her business, she sewed and sold artisanal skirts to small stores and vendors in Santa Cruz and other surrounding towns. In the next few years, using the connections she made as a supplier, she expanded her business to employ three women from a small rural community who have helped her expand her production capacity. Juana is applying for another loan to buy the necessary capital to continue producing and selling traditional skirts. With this loan, Juana is hoping to maintain her existing business and to build capital in order to potentially open her own storefront. With the support if Kiva investors, Juana will have the opportunity to continue gaining business experience and to start working toward her goal of opening her own store. The eight unified women of the Trust Bank are dedicated to working together and supporting each other through the difficulties they face trying to maintain and grow their business. Additionally, their loan officer, as part of Friendship Bridge’s microcredit plus program, provides the women with monthly educational training in their native language of K’iche. The monthly non-formal education covers topics ranging from women’s empowerment, financial literacy, and health and medicinal plants.