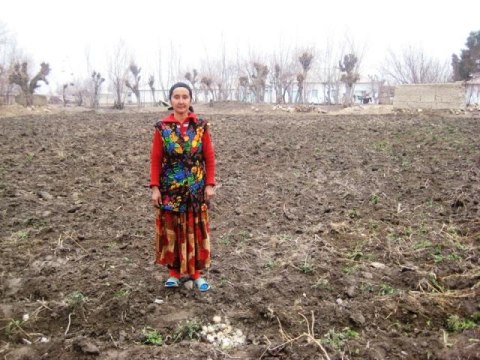 Kholiyar C. is 37 years old. He and his wife (pictured here) have five children. Kholiyar has a middle special education. His specialization is engineering, but he went into agriculture because his salary was too small to feed his family and pay for his children’s education. Kholiyar works hard to cultivate his crops, such as potatoes, carrots, onions, and other vegetables. He works from early morning till late at night, hoping to have a rich harvest. Kholiyar sells his produce in the market where it is always in high demand due to its good quality. He also raises cattle. His work fills him with great optimism and allows him to help his beloved children. His goal is to improve the quality of his agricultural products even more and grow his business. Kholiyar has a large and friendly family who are all always trying to help each other. Today Kholiyar requests a loan of 2500 Somoni (US $725) for the term of 9 months to buy fertilizer and also calves. Let's help Kholiyar as he works hard to improve the quality of life for his family. More about Tajikistan and IMON International: Tajikistan is perhaps best known for its rich history, which includes being a key post along the Silk Road; the end of Alexander the Great's rule; and its famous great thinkers, philosophers, scientists, and poets (including Rudaki, Ibn Sina (Avicenna), Firdousi, Omar Haiyam, Jomi, Mavlavi Rumi, and many others). The country is home to communities that still speak the ancient Sogdian language, epic mountain passes, and a civilization that dates back to the 4th millennium BC. And, even today, it is a complex mixture of the Islamic faith, Soviet culture, New West culture, and Central Asian traditions. But, Tajikistan is also the poorest of the former Soviet republics. The civil war, which ignited soon after its independence from the U.S.S.R., further damaged the already weak economy. In addition, 93% of the country is mountainous and only 7% of the land is arable. These conditions have resulted in high levels of unemployment and have forced hundreds of thousands to seek work in other countries, mainly Russia. While the people of Tajikistan are working to improve its agricultural production and manufacturing sector, nearly two-thirds of the population still lives in abject poverty. IMON's History Since December 2007, IMON International has worked closely with Kiva and Kiva lenders to ensure that poor and low-income clients represent a viable business proposition. Funds raised through Kiva have already been distributed to thousands of IMON International's clients and will continue to provide thousands more with permanent access to the varied financial services they need. To learn more about IMON International's work, please visit: www.imon.tj.