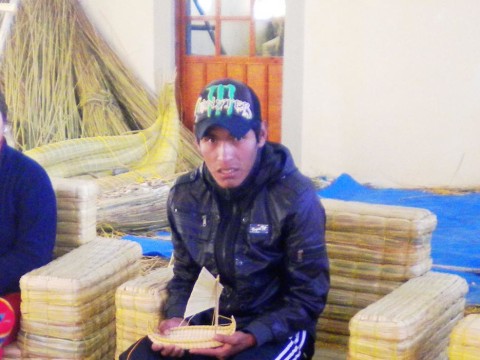 A loan helped to purchase large reeds to make handcrafted furniture and to give his children a better life.

Omar is a 24-year-old married man who has a 5-year-old son. His business is making handcrafted furniture out of large reeds. He is independent, enterprising, responsible, persevering, patient and hard-working. He carries out his business in the “Chililaya Grande” community, an area near the sacred Lake Titicaca, where the inhabitants largely make a living in fishing, agriculture and handicrafts. It is a cold and dry climate with a temperature that varies during the day between 0 and 12 degrees Celsius (approximately 32 and 54 degrees Fahrenheit). Omar is tan-complected with short black hair, dark eyes, short stature and a thin physique. His native tongue is Aymara which is spoken here and he speaks Spanish for the general culture and for business that he does. He lives with his wife who makes a living weaving and with his son who is starting school. They live in their own house made of adobe that has well water and electricity. His business is making furniture from “totora” (large reeds), a natural material from the lake that has been used since the time of the Incas. With this material they made boats with which they sliced through the waters of Lake Titicaca. The most common types of furniture are: large chairs, beds, hammocks and more. This knowledge is the legacy of his father who is a craftsman, “I have done this activity since I was very young. At first it was a game, then we made furniture to order until I got married and had to become independent,” he says. His dreams are to build a brick house and give drinking water to his family. He wants to carry out a wholesale purchase of reeds to make furniture and give a better future to his children. This is the second sequence of loans with the institution in the 4 years that he has been making a living in this activity independently. It is for these reasons that Omar is requesting a loan: for the purchase of reeds to make handcrafted furniture and give a better life to his children.