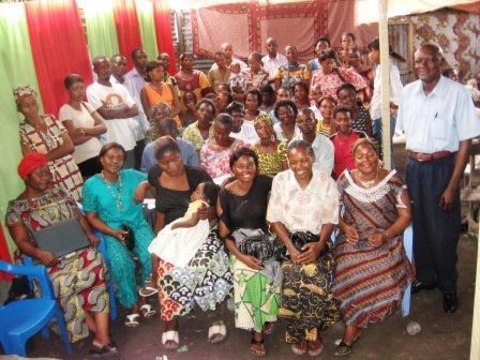 A loan helped To diversify the business by selling foods such as fresh fish, etc.

Nkola operates five radios in different parts of Kinshasa to help people who do not have cell phones communicate with their relatives and friends in different villages. He started his business in 1983. He is well-known in this field and has developed many relationships. His beginning capital was US$ 250. The business was challenging to him at first because he did not know much about running a radio. He also had to navigate renting a place, obtaining legal documents, and determining his employee’s wages. As a beginner in the field, he had to be very careful.

With determination and good management, he succeeded and was gradually able to increase his working capital from his profit and buy four more radios. His business is prospering and makes a profit of about US$ 500 per month. As Nkola has a vision of opening a big wholesale shop to provide business coming from villages, he decided to join one of Hope’s groups named “Bwanya,” meaning “Worthy” in English, last September. He plans to diversify his business with his loans by adding foods such as fresh fish, sacks of corn and miscellaneous other items. Nkola is 56 years old. He is married and the father of eight children between the ages of 10 and 39. Two of them live at home and are in school.