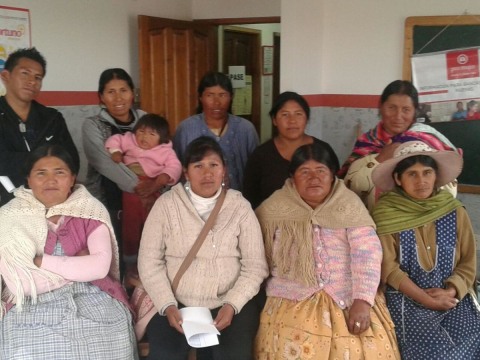 The B.C. "Florida" will initiate it's sixth cycle of Pro Mujer, as a part of the Focal Center Collpani, is composed of nine members and is directed by a board with Mrs. Juliana as the president. Previously the members of the organization worked in a variety of businesses, such as a neighborhood store, selling CD's, selling salchipapas, selling clothing, beauty salon, selling blankets, selling vegetables, and selling fruits. The loan that they took will benefit small mircoentrepreneurs where Mrs. Juliana is integral. For six years Pro Mujer has been entering by the invitation of her friend who is a client of the institution. Today she has a business selling fruit. She discloses that she learned this business several years ago to start a neighborhood shop. With the passage of time she decided to include selling fruits in the space, a product that was faring better so she decided to continue selling it. The loan that they now will take is for the increase of capital (buying wholesale fruits) that will acquire better sellers in the city of La Paz and later will commercialize her selling space. This way of working allows her to generate resources to support her family financially, since she is single and has a child. When she is asked if she likes Pro Mujer, she responds that she likes the training that the institution offers her.