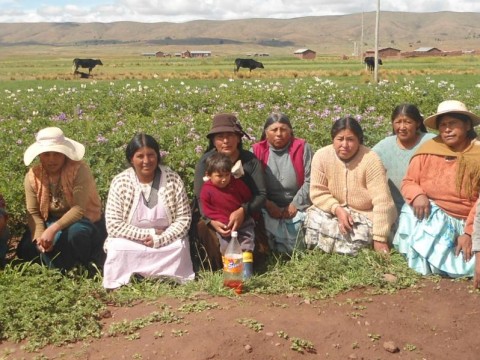 The community organization Las Korichuymas De Percuta will begin its first cycle with Pro Mujer, as part of the Achacachi regional center. It consists of nine members and is led by a board of directors in which Adela is the president. The businesses run by the organization's members are varied, and include: selling milk, selling cheese, selling food, a repair shop, and construction services. The loan obtained will benefit the micro-entrepreneurs, Adela being one of them, and she states this is the first time that she has been a part of Pro Mujer. She joined through the invitation of a massive campaign that the institution launched in the area. Currently she has a milk selling business, and says she learned this trade from her parents since she done this type of work since she was a little girl. She recalls starting the business by selling her sheep to acquire dairy cows which she uses for production. The loan she's obtaining now will be used to increase her working capital (purchasing dairy cows) which she will acquire from wholesale vendors in the community, and after raising the animals she will use it as a means of production. This type of work will allow her to generate income to support her family financially, since she's married and has four children. When asked what she likes about Pro Mujer, she answers that she likes the benefits that the institution offers.