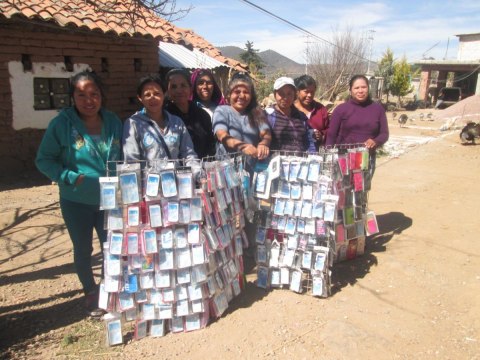 The group named Ferrari is made up of hardworking, responsible, and very kind people. Dalia is a woman who is dedicated to her family. She is 37 years old and married to Marcelo. Together they have formed a family with four children, all of whom are school age. Over the last 10 years, Dalia and her husband have sold cell phone accessories. They started their life as vendors in the capital of the country (approximately two hours away from their community) selling costume pieces. Later, they noted that the market for cell phone accessories was growing so they changed their merchandise. While Dalia and Marcelo worked in Mexico City, they also invested in the construction of their house in their community. Once it was ready, they returned permanently to the city where they grew up. Now, Dalia sells her merchandise from a store. She works every day from 9 a.m. to 9 p.m. while Marcelo sells the same merchandise out in the plazas with a mobile store front. With this new loan that Dalia is requesting, they will be able to buy more phone accessories such as covers, screen protectors, batteries, headphones, etc. Currently, in order to earn more income, Dalia also sells seasonal items. One of her goals is to keep improving her home and, above all, help her children to finish studying for a professional career. The other group members include: Mayra, who will invest in sweets; Alma, who works in carpentry; Rosalba, who sells potatoes; Priscila, who sells embroidery and bags; María del Carmen, who runs a bakery; Esperanza, who sells corn; and Belén, who sells underwear. *The photo was take on Dalia's small patio. All of the group members are showing the items Dalia sells. Dalia is wearing a grey jersey.*