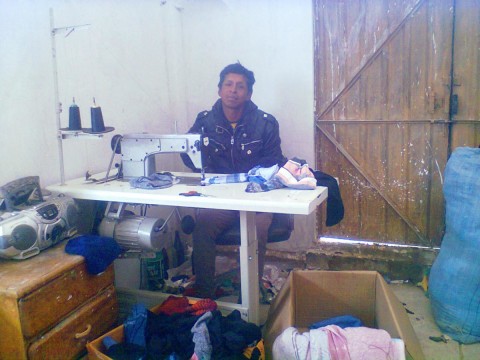 A loan helped to purchase fabric, thread and other hat-making materials to make them in bulk and pay his child's school expenses.

Freddy is a 39-year-old man, single, has a 5-year-old son, and his business is making hats. He is a good father, enterprising, dependable, determined, strong, responsible, and very hard-working. He does his work in the "Ventilla" zone, an area characterized by its fairs on Thursdays and Sundays, where one can find all sorts of items. It has a cold climate (0-12 degrees centigrade) and strong solar rays that can burn the skin, at an average altitude of 3800 meters above sea level. Freddy has dark skin, short black hair, dark eyes, his native language is Aymará and he speaks Spanish because of the general culture and for the business he does. He shares his life with his son, who is starting his schooling. They live in his sister's house, which is made of brick with a roof of metal sheeting and which has drinking water, household gas, electricity, and sewer services. His business is making hats to protect the head from the cold. His way of making them is to purchase fabric remnants at a textile business. Later he combines the variety of remnants, making hats of all sizes to sell them in a city 12 hours away where the cold is intense and constant throughout the whole year. "The city of Potosí is my public, I travel constantly to leave my merchandise and it sells itself, because in this city the cold is very strong and most of the people are used to wearing all sorts of warm clothes..." he says. His son is used to staying in the care of his sister while he travels. His dream is to have a permanent retail space in the city of Potosí. He wants to purchase hat-making materials such as fabric, thread, and more. This is his first loan cycle with the institution in the 5 years he has been doing this work. It is for these reasons that Freddy asks for a loan to purchase fabric, thread and other hat-making materials to make them in bulk and pay his son's school expenses.