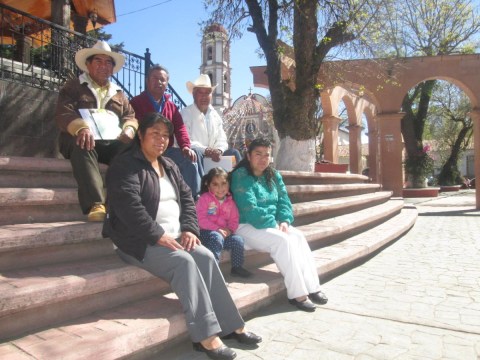 A loan helped to buy pigs.

The name "Los Ganaderos Unidos" [The United Ranchers] was inspired by the great bond between members. They are always in constant communication, they help each other in any circumstance, and they are all dedicated to raising animals. José Luciano and Alberto will invest their loan in calves, Valentina and Cecilia will invest in calves as well, and Don Miguel in pigs, his great passion. Don Miguel is a very hardworking and friendly man. He is 63 years old and is married to Mrs. Luisa who is a housewife, although she sometimes helps out in the pig business. Together they have a family with seven children of which only one is dependent and is currently studying elementary education. It has been 22 years since Don Miguel decided to begin his business. "I did not have a steady job and the expenses of our children were too much between food, shoes, and education and because of this I decided to breed animals," said Don Miguel who bought a sow at first. Fortunately, at this time he also had a good crop of corn that he used as food and his little pig grew very well. As a result of his effort and dedication to the growth of his first little pig, in four months he already had 10 piglets more. The only difficulty at that time was that he did not have a good sized corral. Don Miguel is very thankful to VisionFund and Kiva because he's been taking out loans for 16 years which he has used to expand his business. He now has 12 sows and 41 piglets along with an enormous warehouse which has the impressive capacity to house even more pigs. Everyday Don Miguel works with his animals. His clients arrive directly to his house. "These animals have been my salvation for paying all the costs of my house and my children's education." This time he is asking for a loan in order to buy more pigs. Don Miguel has acquired a lot of experience and his earnings are good, nevertheless, he is in trouble when the food price rises. In some occasions he has had to borrow from the owner of the store where he buys feed in order to have tons of different types of food. Despite some difficulties, Don Miguel never stops trying to achieve his goals: to have a bigger warehouse, to have more animals, to balance his expenses and to someday stop asking for loans. *The photograph was taken on the municipality stairs. Don Miguel is in the red sweater.*