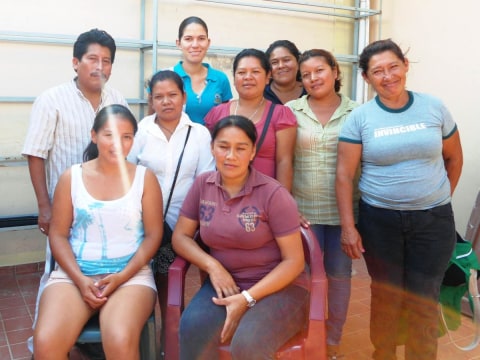 A loan helped to buy second-hand clothes wholesale to resell and pay the general expenses of her two youngest children.

Roxana is 39 years old, single, and the mother of three children aged 25, 16, and 14. She works selling second-hand clothes. Roxana is a good mother, entrepreneurial, independent, pleasant, sociable, responsible, and hardworking. She works in the southern part of the city, an area where, once a year, nearly one thousand craftspeople gather in the La Alasita fair to sell miniatures of every kind with the goal of making this miniature wish come true. The city has a hot and very humid tropical climate, and a nearly constant temperature of 30 °C (86 °F) throughout the year. Roxana is dark-skinned, short, and black-haired (she is shown in the photograph in the center, seated, and wearing a dark mauve shirt). Her native language is Guaraní, which she speaks with her family. She also speaks Spanish to communicate more widely and to conduct her business. She lives with her children. The oldest works and the minors go to school. They rent a brick house with a corrugated metal roof, which has running water, electricity, and sewer service. Roxana's desire for self-improvement motivated her to become the leader of a communal bank for business people (in areas such as transportation, fabrication of leather handbags, salteña (a kind of turnover) sales, machine weaving, equipment repair, furniture sales, duvet sales, and sewing of traditional skirts) to request loans and improve their businesses. Her business is to sell second-hand clothes such as pants, belts, short-sleeved shirts, Bermuda shorts, and others. Roxana works every weekday during the day as a street vendor, she says, "giving clothes a second chance to the benefit of both buyers and sellers". Her dream is to have a sportswear store and stop having to wander around. She would like to buy second-hand clothes wholesale and be able to meet demand during this season. Thus, Roxana is requesting a loan to buy second-hand clothes wholesale to resell and pay the general expenses of her two youngest children.