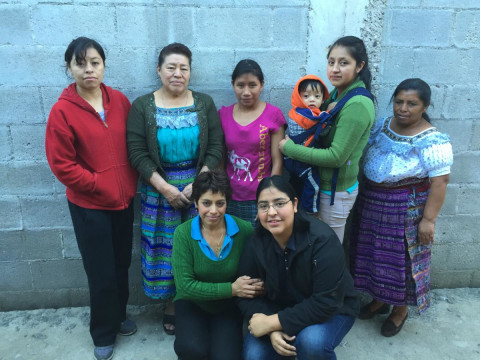 A loan helped to buy another stove, utensils, pots and pans, so that she can serve her many customers quicker and more efficiently.

Santa Cruz el Quiche is the municipal capital of Quiche, the department in Guatemala with the highest incidence of poverty, with around 85 percent of the population considered poor-- 33 percent of which are extremely poor. The Friendship Bridge Trust Bank “Las Sirenas” (Mermaids), is made up of seven motivated women of El Quiche. Candelaria, a 43-year-old member, joined the Trust Bank to expand her established business as the owner of a small restaurant. Candelaria, on her fourth loan cycle with Friendship Bridge, is an incredible leader and organizer, guiding newer members through the process. With a smile Candelaria explained that she works every day of the week from five in the morning until midnight, preparing, cooking and serving Guatemalan snacks and refreshments. The everyday fare of her restaurant, named after her mother who originally opened the business, consists of tostadas, chuchitos (tamales made with corn), and Atole (a hot corn based drink). Candelaria is applying for this loan in order to buy another stove, utensils, pots and pans, so that she can serve her many customers quicker and more efficiently. Candelaria, with her current business running into capacity constraints, sees the opportunity to open another location. With the support of KIVA investors, Candelaria will be able to maximize her current space and build toward opening another location.