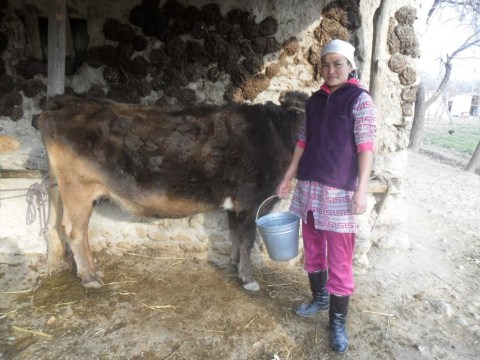 Gulsunai's loan finished fundraising, but these other borrowers need your support

A loan helped to buy three cows in order to increase her livestock headcount.

Gulsunai is 27 years old, married, and the mother of two. Gulsunai has received secondary education. Her neighbors speak warmly of her, describing her as a hard-working, optimistic and confident person. As a main source of income for her family, since 2010 Gulsunai has been raising livestock and growing farm produce. She has six cows and six horses on her farm. In addition, she has a 1.11 ha [2.7 acres] land plot, where she grows sainfoin [a plant used for animal feed] and corn. Thanks to Gulsunai's hard work, her farm now brings in about 10,000 KGS per month, which is used to cover the cost of food and everyday needs of her family. In order to develop her business further, Gulsunai has applied to the Bai Tushum microfinance institution for a loan in the amount of 150,000 KGS to buy three cows. Gulsunai plans to use the revenue from her loan for an additional expansion of her business.