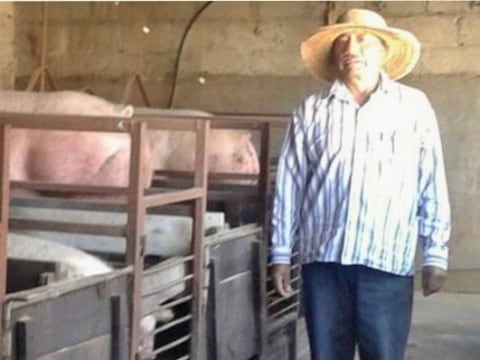 A loan helped to invest in a biodigester for his farm.

Andrés owns around 150 hogs and a few other animals on his farm, that produce important amounts of previously useless and contaminating manure. With his Sistema Biobolsa biodigester, Andrés will have the opportunity to transform this waste into a productive resource, producing his own biogas and organic fertilizer, leading to economic savings as well as health benefits and a reduced carbon footprint for his farm. Indeed, the methane-rich biogas produced in the biodigester will allow him to supply his home and farm with the necessary renewable energy to cook and heat water and to displace the expensive LP gas. Since he also cultivates corn for which he used to buy chemical fertilizers, Andres will save money and protect his soil by replacing petrochemical fertilizer by the potent biofertilizer, thereby increasing the yield of his corn in a natural way. His farm will become more productive, respect natural cycles, and reduce its dependency on external inputs and fossil fuels, while reducing operating expenses. This loan represents 50% of the total cost of the biodigester, the remaining part being covered by a government subsidy.