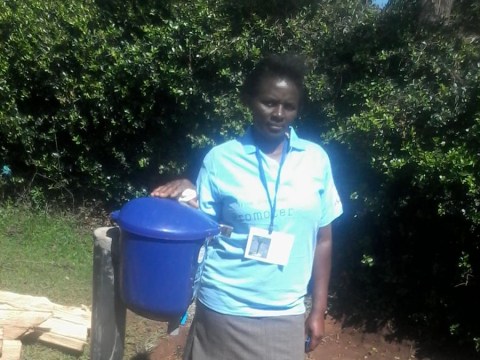 A loan helped To ensure that the community has access to safe drinking water via chlorine dispensers.

In Nyabosongo C village in Kuria East, Kenya, Esther has volunteered to be the promoter for a new chlorine dispenser program. Esther is a friendly member of the community with 4 children. Esther lives with her family in a house made of mud walls, a concrete floor and an iron roof. Nyabosongo C village does not have a piped water supply, so the community collects their water from a local spring. This water is easily contaminated with bacteria that can cause water-borne diseases. Chlorine dispensers offer a solution to this problem by allowing people to treat their water to make it safe to drink. Esther’s community needs a loan to cover the cost of installing and maintaining chlorine dispensers at the water sources in the area. Esther has volunteered to be the promoter to encourage the community to use the dispenser and to refill it with chlorine when the tank runs low. Esther volunteered to be the promoter because she wants to help the community access safe water that will help reduce water-borne diseases. There are also 2 other volunteer promoters from the surrounding community who are part of this group loan: Catheline and Johnes. The Kiva loan will be repaid by Evidence Action (www.evidenceaction.org) on behalf of the community through the sale of carbon credits. Using the chlorine dispenser generates carbon credits by avoiding the need to boil water to make it safe to drink. Revenues from the sale of carbon credits to organizations and individuals wanting to reduce their carbon footprints will be used to repay Kiva lenders and also to make sure that Esther’s community can have access to safe water now and in the future.