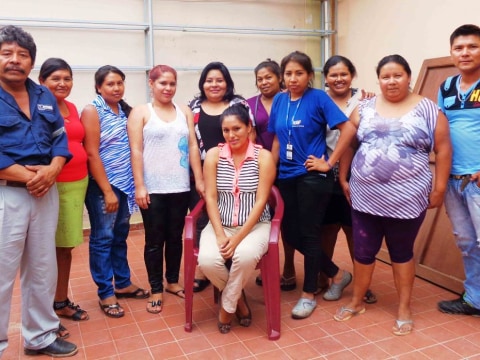 A loan helped to buy supplies at wholesale for making traditional sweets.

Maria is a single 24-year-old woman without children, and she has a business selling sweets. She is entrepreneurial, sociable, nice, independent, responsible, and hardworking. She conducts her business as a street vendor in the southern area of the city, an area characterized as nestled among the banks of a majestic stream, an area for traditional weekend strolls, and rustic construction with regional materials, where one can savor the traditional food and do some sports. The weather is warm, tropical, and humid, with a temperature that varies during the day between 21-35 degrees centigrade, all year long. Maria is dark-skinned with long black hair that she ties up. She is short in stature, and her native language is Guaraní, which she speaks at home. She also speaks Spanish for general purposes and in her business (in the photo, she is seated in the center, with a striped blouse and beige pants). She lives in a relative's home. They live in a rented house made of bricks, with a corrugated metal roof. They have potable water, electricity, and a sewage system. Her desire for self-improvement led her to form a group of people with businesses such as: production of mattresses, selling flowers, tea service, seamstress shop, selling cosmetics, selling jacket, video store, selling silverware, selling cellular phones, selling chicken, and selling fishing nets. She formed this group in order to request a loan, and accomplish her goals. Maria makes and sells sweets. The traditional sweets that she makes are nutritious, because not only do they have an enjoyable flavor, but they also contribute to the daily diet a portion of calories. The sweets are a suitable flavor and color due to the fruit from which they are made, with medium acidity, and a nice consistency, appearance, and aroma. "The sweets are popular among adults and children" says Maria. Her dream is to have a store of sweets. she would like to buy supplies such as granulated sugar, citric acid, pectin, fruit, a glass jar and a plastic jar for packaging, and other things. This is the first request for a loan with the institution in her 9 years of doing business independently. For these reasons, Maria is requesting a loan to buy supplies at wholesale to make traditional sweets