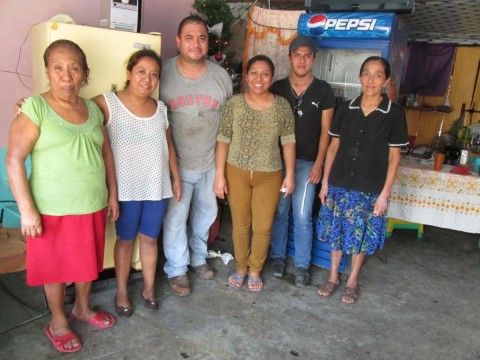 In this sugar cane producing region, the majority of the residents work in the sugar industry. Some of them spend their time in the fields planting, tending, and harvesting the sugar cane. Meanwhile, there are others who transport the sugar cane by trucks or carts to the mills where the cane undergoes various processes before it is turned into refined sugar.

There are other residents who are self-employed as a result of starting their own businesses. Such is the case with the members of the group named “Las Gaviotas” (The Seagulls). They work hard each day so that they can provide a better quality of life for their families. The members and their businesses are as follows:
• German owns a laundromat.
• Enedina sells food, soft drinks, and perfumes.
• Manuel is a Zumba instructor.
• Margarita sells groceries
• María and Esperanza sell food.

Enedina is 32 years old and the mother of two teenagers, a 15-year-old and a 10-year-old. She and her husband Martin are in a common-law relationship. Enedina only had the opportunity to study through high school. For this reason, she wants to continue supporting her children so that they can do better than her. She believes that the future favors those who are prepared, so her children are her priority.

Fifteen years ago, Enedina began helping her mother sell fast food and soft drinks underneath a thatched roof that was built in the front of their house. As the years passed, the profit they earned was used to remodel their home. They renovated the front part and it is still the location where she continues to sell food. When she opens the metal gate in the mornings, it signals to her customers that the food is ready. “What I enjoy most about selling food is that I can be at home without having to neglect my family. In addition, I have learned how to work thanks to my mother,” says Enedina. She always remains active on site as she attends to her customers.

With the intention of improving her business, Enedina is requesting a loan so that she can invest in more supplies for preparing meals such as tomatoes, chili peppers, onions, garlic, cilantro, potatoes, oil, beans, meat, and soft drinks. Her plans include making renovations to her place so that she can have more space and be able to attend to more customers.

“Putting the loan to good use will make our dreams possible, so we will work until our goals are met,” says Sra. Maria, who is Enedina’s mother. She is also a member of the group.

*The photo was taken in the small kitchen where Doña Maria and Enedina prepare food. Enedina is seen in the photo wearing a white blouse with black dots.