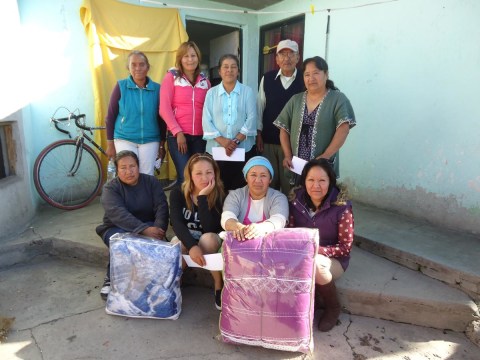 A loan helped to purchase plastics and disposable items.

The members of the “Géminis” (Gemini) communal bank have known each other for a number of years. They have a very strong bond of friendship, which has resulted in a solid communal bank.

Amalia is a friendly and hard-working woman. She is 50-years old and married to señor Agustín, who works as an employee at a gas station. They have three children, only one of whom is still dependent on them.

For eight years, Amalia has had a small disposable plates and plastics business. She started the business because she and Agustín had a little savings that knew they should invest in a financial activity. They decided on this type of merchandise because it deals with non-perishable items that can keep for a longer period of time.

At first, Amalia sold her products door to door to her neighbors. With her profit, she was able to rent a store front. Later, she set up a part of her house to accommodate her merchandise. Every month Amalia travels to other cities, where she finds affordable prices that allow her to make larger quantity purchases. Currently, she only dedicates the afternoons to her business, as she spends her mornings taking care of her household chores. However, she doesn't want to give up her business, as it is a way to help her husband and to pay for her son's educational expenses. Doña Amalia would like to have more capital to invest.

The other communal bank members are also very happy about and grateful for Kiva's and VisionFund's support. The loans have helped them to get their families ahead and to invest in their respective businesses. Erica y Saturnina will invest in clothing sales; Jessica in her blacksmith's; Ofelia in pigs and chickens; Ma Felisa in bull calves; Carmen in her taco stand; Lidia in pigs and don José in bedspreads.

*The above photograph was taken at Erica and Don José's house. You can see some of the bedspreads that don José sells and the bicycle he uses to make his rounds in the afternoons.