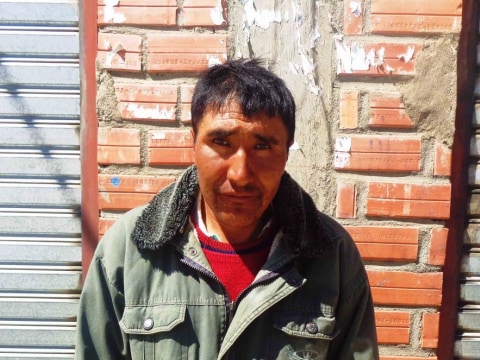 Eulogio Ramiro's loan finished fundraising, but these other borrowers need your support

A loan helped to buy two dairy cows to fatten during the summer season.

Eulogio, 38, is single and has no children. He's an independent, enterprising, generous, friendly, active, responsible, and hardworking man. He lives with his parents, who are very old and don't work. They live in an adobe house that has electricity and potable water. Eulogio is short and dark and has short black hair. His native language is Aymara, which is spoken in the area, and he speaks Spanish because of his level of education and for business. His business is selling cattle. He works in the town of Batallas, an area known for being near the sacred Lake Titicaca. The residents of the area work in agriculture, ranching, and dairy products. The climate is cold and dry, at an altitude of 3,800 meters above sea level and a temperature that varies from 2 to 12 degrees centigrade during the day. He sells cattle on Saturdays starting at 4 in the morning in the local market. Dozens of merchants get together to sell or exchange their products, including sheep, cattle, potatoes, chuño, milk, cheese, quinoa, and totora reeds--all the products grown in the area. In his stable he has dairy cows, chickens, and a llama that's in charge of protecting the stable from intruders. "I inherited my stable from my parents. My whole life I have worked feeding cows, chickens, and some llamas. It's a job that requires a lot of work, because you have to get their food" he said. Eulogio's dream is to have a bigger stable with more cattle. He wants to expand his business with the purchase of two dairy cows to fatten, because it's the season for good pasture and forage. This is his first loan sequence with the institution in the seven years he has been working independently in this line of work. For those reasons Eulogio's requesting a loan to buy two dairy cows to fatten during the summer season.