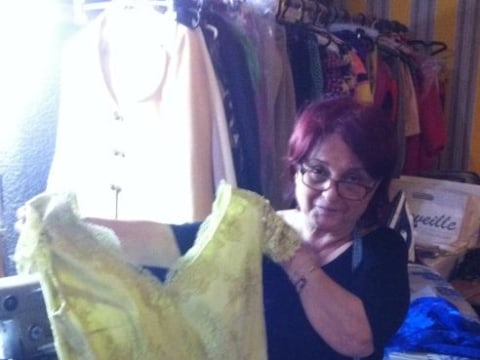 A loan helped to buy necessary fabrics, textiles and accessories requested for her new designs, especially for the autumn and winter collection and the Holy Christmas and New Year seasons.

Introducing Layla, a 63-year-old widowed mother of five daughters, who sacrificed her whole life working as a tailor from her house to provide her daughters with a better standard of living and education.

Layla was, and still is, the sole breadwinner of her family. It all started at the age of 21 when she decided to learn fashion design and tailoring. She proved to be a smart learner, excelled at it, and was recruited to a well-known fashion-design atelier in Beirut.

Being the proud mother of 5 daughters, she had to put her career and dreams on hold for a long time till she met Al Majmoua, who revived her dreams and helped her set-up her own atelier.

This was 12 years ago... Since then, Al Majmoua and Layla have been working hand in hand and her business has been growing allowing her to proudly sustain the needs of her family but also create jobs for 3 women tailors.

Layla was selected to be one of 6 women entrepreneurs who displayed their collection in a fashion show that was held in December 2007, in the framework of the Women Micro Entrepreneurs and the World of Fashion project funded by Save the Children, which benefited 300 women tailors, as the outcome of a one year intensive preparation. The work of these amazing beneficiaries was recognized by Fashion TV Arabia who offered media coverage for this event.

Layla was also selected by PlaNet Finance Foundation as the “Micro-Entrepreneur of Honor” for the year 2014. She was supposed to receive her award during the 4th edition of the PlaNet Finance Foundation gala dinner which was organized under the auspices of the Cannes Film Festival with the objective of raising 200,000 Euros for the co-financing of programs in the field in order to help women entrepreneurs in Lebanon, Benin, Brazil, Egypt, France, Ghana, Madagascar, Morocco and elsewhere. The gala dinner was followed by an exclusive live auction conducted by the Artcurial Auction House.

Unfortunately, her husband’s health was very critical, so she decided to stay next to him during his remaining few days and couldn’t attend the event. He passed away leaving her alone again with her five daughters and successful career to move on.

With strength and determination, Layla succeeded in providing better standards of living to her 5 daughters and as well as 3 women dressmakers through the creation of job opportunities. She had the chance to contribute to her daughters’ wedding expenses, in addition to urgent medical needs.

Layla has acquired a wide experience in this domain with her greatest features being evening gowns and wedding dresses.

Today, Layla is acquiring her eleventh loan cycle from Kiva’s field partner Al Majmoua in order to buy necessary fabrics, textiles and accessories requested for her new designs, especially for the autumn and winter collection and the Holy Christmas and New Year seasons.

Respected and trusted by all, Layla naturally became a role model and peer trainer for other female micro-entrepreneur beneficiaries of the Al Majmoua program.