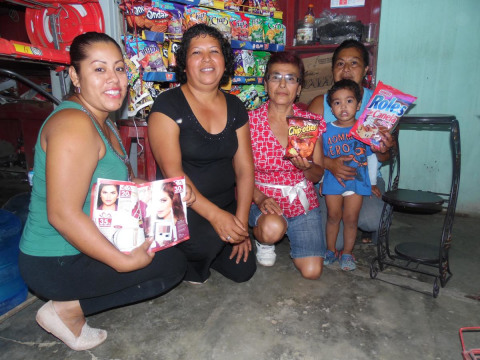 Las Minas Group's loan finished fundraising, but these other borrowers need your support

A small park called Alameda is the place where the community residents get together in the afternoons to play volleyball or soccer, to ride bikes, to skate, to walk or chat. The community belongs to a zone that produces sugar cane and so the principal sources of employment are the land and the sugar factory. In this community a group of four women was formed, two of which have 15 years of experience in their businesses, one of them two years, and the other one year. The loans that VisionFund has given them have been the necessary support so that their “gold mines,” their businesses keep growing. The group is composed of Mirella – fruit and cosmetics sales María Magdalena – grocery sales Alondra – chicken sales Guillermina – ceramics and gifts Mrs. María Magdalena is the mother of four children, all of them independent, who support their mother’s activities when it’s possible for them. She began 15 years ago by selling soft drinks, fried food, cookies and bread, and it was thanks to the business that her children continued studying. María Magdalena also has a two-year-old grandson who spends all his time with his grandmother, or “Nana” as he calls her. María Magdalena began her business with the firm purpose of helping her husband with the household expenses. She says that at the beginning she sold a variety of groceries, but with experience, she noticed which were the star products; now those are the only ones in which she invests. “I am very happy in my business. I have gotten used to selling and being active,” says doña María, who will invest her profits and the loan that she is given to increase her inventory. In addition, a new plan is taking shape María Magdalena’s mind: with her next profits she will buy oil, cheese, beans, masa, meat, cream and vegetables because she hopes to start selling snacks. For this she will also need to do some remodeling in the corridor of her daughter’s house. The idea of opening a new business originated from her providers who always ask her to prepare them a snack or meal. The group expresses its thanks for the opportunity to receive a new loan to invest in their businesses. *The photograph was taken in the shop of María Magdalena, who is wearing the blue blouse. In the photo, a flowerpot can be seen that doña Guillermina, in the red blouse, sells. Mirella is showing a catalogue of cosmetics she sells. The little one is María Magdalena’s grandson.