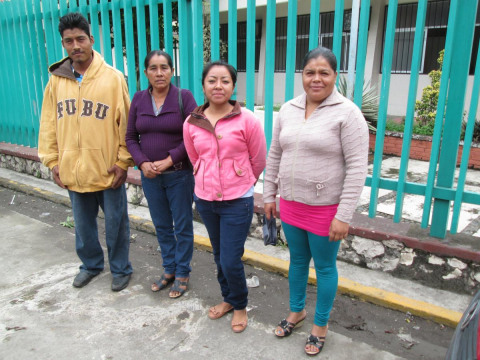 El Naranjal Group's loan finished fundraising, but these other borrowers need your support

The group's name results from the fact that at Francisca's house, where the group meets to make their payments, there are more than 15 orange trees. The group is composed of the following persons: Francisca and Rosa, who sow sugar cane; Angelica who sells clothes; and Ricardo, who sells soft drinks. Ricardo, a member of the group, is 25 years old and works in the countryside to cover household expenses and help his two brothers who are still studying. For the same reason, two years ago he decided to begin selling soft drinks in his house to increase his income. Commenting on how he came to start his business, Ricardo says that there were customers who never finished paying and he thought about ending the business, but after considering the help it meant for his mother, he continued working and today, he sells a greater variety of flavors of soft drinks and in larger quantities. Presently, sugar cane harvesting season has begun in the region, and he is selling soft drinks to workers in the fields. Ricardo enjoys this season, not only because his earnings increase but because he likes the smell of burned cane after the workers burn off the land. Ricardo needs a loan to invest in drinks of different sizes as well as disposable cups to help refresh the people who work all day long in the fields. He says “I give thanks to God for permitting me to be who I am and giving me the large family that I have. They are my principal motive for continuing to work so hard.” Naranjal is the name of the group, located an hour from the center of the municipality. It's worth mentioning that upon arriving at the locality where the group was organized, one has to travel in personal transportation or by collective taxi, since the bus route has changed. Along the road we use to reach this terraced area, one sees the cane fields, pastures, and part of the hill. The majority of the houses have a well to supply their water. *The photograph was taken in a locality near where the group meets.