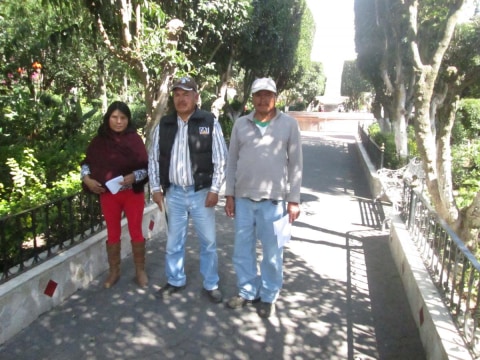 La Montaña Group's loan finished fundraising, but these other borrowers need your support

A loan helped to buy ingredients.

The “La Montaña” group is located in a Mazahua community where the people keep their native language. The members are very proud of being in a place of such cultural richness, friendly people, and many celebrations that provide more color and coexistence to their days. Making what is referred to as “Mountain Bread” or “Lice Bread” is one of the main activities in this community. Hipólito, one of the group’s members, has spent most of his life around the ovens. He recalls that his father and grandfather taught him about bread baking. His grandfather was very well known in the area, not only because of the great flavor of the bread he baked, but also for the friendliness with which he served his customers. At age 15, Hipólito started his own business baking bread, although it was difficult to transport it for lack of a vehicle. He used a small donkey to take the wooden boxes of bread from one place to another. He would go out every morning at 5:00 am so he could cover three or four communities and he would return home at 7:00 pm. Now Hipólito is a father. He is married to Juana and has seven children and two daughters are still dependent on this couple for support. He continues in the same business with his wife’s help. He was able to improve his baking area with his earnings and he and his wife begin working the dough daily at 4:00 am so they can sell it in town in the evenings. “I love my work because I make a living with it and my children grew up with it,” he states proudly. Hipólito also shows his gratitude to Vision Fund and Kiva because, thanks to the loans, he was able to invest a little more and buy ingredients in greater quantities. The more recent earnings allowed him to buy two vehicles, which he now uses to transport the bread. His new goal is to sell bread to other stores so that more people can taste the flavor. The other group members are Cristina, Hipólito’s daughter in law, who sells bread, and Seberiano, one of Hipólito’s good friends for several years. He will buy groceries for his store. *The picture was taken in the municipal park, a place frequented by students and friends who take advantage of the space to socialize. Hipólito is in the center of the image.