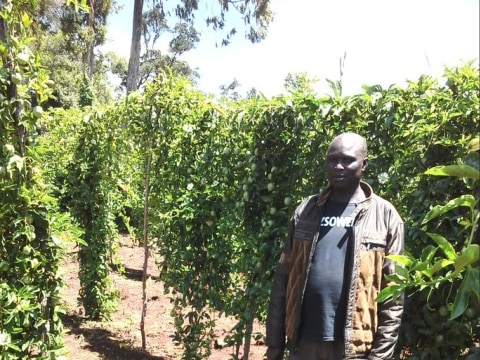 “When people come together, they are powerful,” says Musa, a 37-year-old farmer who has 3 children and lives in the village of Moiben in the Kapsowar area of Kenya. As a young man, Musa watched women in his village mobilize to replace traditional thatched roofs with waterproof corrugated iron. The memory of this collective effort led him to join Simotwo self-help group. For the past 10 years Musa has been actively involved in mixed farming. He loves passion fruit farming in particular. In rural Kenya, gender roles still adhere. Men do the heavy work on the farms, while their wives fetch water and carry firewood. However, this has not been a setback for Musa, who is not married yet has still managed to earn great profits with his farming. Kapsowar is one of the places that has favorable conditions for horticulture farming: good climate, soils, transport system, and market. Musa has always wanted to diversify and start horticulture farming, but his biggest challenge has been a lack of funds to get the business started. So, Musa is requesting a loan to start horticulture farming. Through Simotwo self-help group - where members co-guarantee each other to secure a loan - Musa joined Juhudi Kilimo, a microfinance organization that supports young and enterprising farmers. With your loan, Musa intends to buy good quality vegetable seeds, flowers, and potatoes. Proximity to an airstrip will allow him to transport his produce faster to an international market, hence earning him more profits. This loan will improve Musa's living conditions and secure the future of his children.