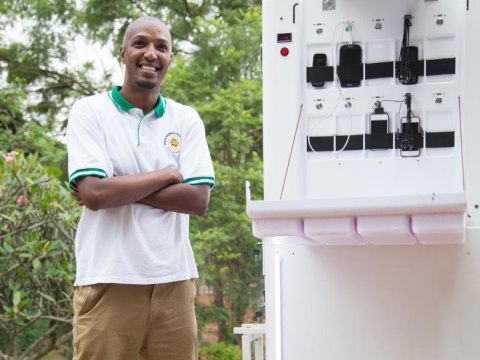 Henri is a phenomenal entrepreneur and innovator. Four years ago, he identified a need. He saw that in Africa, mobile phone penetration rates were skyrocketing, but that basic electricity infrastructure was not. There were now millions of people with mobile phones, but nowhere to charge them. Since then, he founded African Renewable Energy Distributor (a-r-e-d.com) and developed a high-tech solar powered mobile kiosk that can charge all kinds of small electronic devices. These kiosks use smart-grid technology so that they are the most efficient, easiest to maintain, and highest quality of all of the charging kiosks. Henri also uses a franchise business model, so that with each new kiosk he actually creates another micro-entrepreneur. Henri has already deployed 6 kiosks in rural marketplaces and bus stops in Rwanda. His goal is to have 400 kiosks throughout Rwanda and Burundi within the next 3 years. In addition, Henri has successfully landed a contract with Airtel, a large mobile operator, for exclusive branding on all of the kiosks. With this advertising contract and small startup franchise fee, Henri will be able to recoup his costs within 7 months of deployment. Although Henri has a strong financial model, he desperately needs this loan to that he can order and deploy the kiosks. Each kiosk costs 1,000 USD, so this loan will cover the purchase, production and shipment of 10 kiosks. Henri has been an entrepreneur with AEC for over a year. He is incredibly hard working, innovative, and resourceful. We are fully confident that this loan will be repaid with the same focus and success as with all aspects of his business.