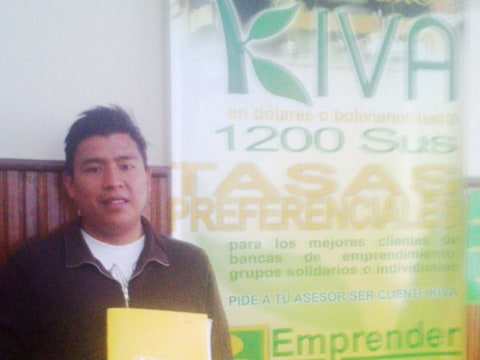 Mauricio Felipe's loan finished fundraising, but these other borrowers need your support

A loan helped to pay for tuition fees and buy two laptops for himself and his partner.

Mauricio is a 24-year-old man who lives with his partner, has a two-year-old son and works as a filing clerk at an insurance company. He is a good father, entrepreneurial, responsible, intelligent and hardworking. His job is located in the central zone, an area characterized by all types of businesses such as universities, public offices and private companies that exist along side one another – and by a cold and dry climate with a temperate between 4 and 21 degrees Celsius during the day and throughout the year. Mauricio has a dark complexion, short black hair and is of medium height. His native language is “Aymara” which is no longer spoken, but he also speaks Spanish in order to study and in daily life. He lives together with his partner who looks after their child and also studies at the university. They live in a rented house built of brick with running water and electricity. He works as a filing clerk and his tasks mainly are: coordinate and monitor the receipt of documentation; identify the folders where the material will be filed; receive material to file; classify material to file; code the material according to an established coding system; provide records and/or documents to different units according to current regulations; complete a reading of the documents to file; and file the received documents in the appropriate files. “Without filing, there is no access to information, much less transparency,” Mauricio says. He divides his daily activities between his job and the university. His dream is to complete his professional degree and obtain a good job in order to give his daughter a quality of life that he didn’t have. He wants to be able to pay tuition fees and purchase two laptops for himself and his partner who also studies at the university. It is for these reasons that Mauricio is asking for a loan to pay for tuition fees and buy two laptops so that he and his partner can graduate from the university.