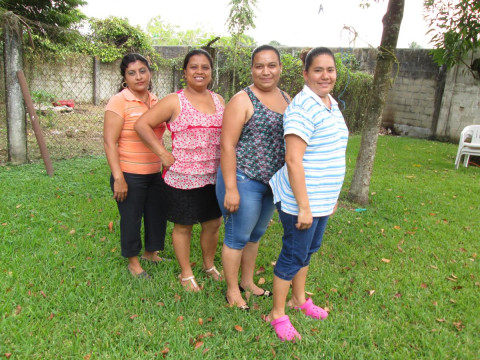 'Los Portales' is the name chosen by the members of this group when they approached VisionFund to ask for a loan to invest in their activities. The community where the association is located produces sugarcane, so, most of the people there work in the fields, preparing the soil for planting cane, making sure the crops grow healthy, and cutting cane during the harvest season. During the six months of cutting, there are 4 mills (sugar factories) nearby the community that blow their whistle three times a day to announce the change of shift of their employees. The team has 4 members: Jessica - Sells Purified Water Mirna - Sells Food and Video Games. Ada Luz - Sells Cosmetics and Tupperware. Teodora - Sells Cosmetics. They have formed a strong family-like bond united by their friendship, which has allowed them to rely on each other during hard times. Mirna, better known as "La Nena" is a hardworking, honest, friendly, simple, charismatic, cheerful, mother of a young woman and a teenager. Mirna is married to Daniel who encouraged her to start selling food. Initially, she sold meals only on the weekends, but over the months and with the support of her family, she opened a diner in her garage. She now serves her customers Monday through Friday from 8am to 9pm and students in the community are the most frequent customers at her small restaurant. La Nena also prepares lunch meals for her friends' children and she also takes delivery orders that bring in some more money. Her biggest challenge is to serve her customers coming into the diner and deliver her orders on time. 4 months ago, Mirna decided to expand and start renting video games out of the same location. Encouraged by her son, she invested her savings in two video consoles, joysticks and games. Always innovating and looking for improvement, Mirna decided to start selling smoothies to she wants to invest the loan to buy bananas, strawberries and chocolate powder. She also needs to buy more ingredients to continue preparing breakfast meals; the most important ingredients are meat, bread, pineapple, mayonnaise, ham, lettuce and cheese. With her profits Mirna will continue saving and reinvesting in her business especially to pay for ads in the local community radio station, because even when many know about her business, she hopes to get more people to enjoy her food. No matter the outcome, she will continue sending her 16-year-old daughter and 10-year-old son to school, because that's the best legacy a parent can give their kids. *The picture was taken at Mirna's house's backyard. Mirna is wearing a striped blouse.