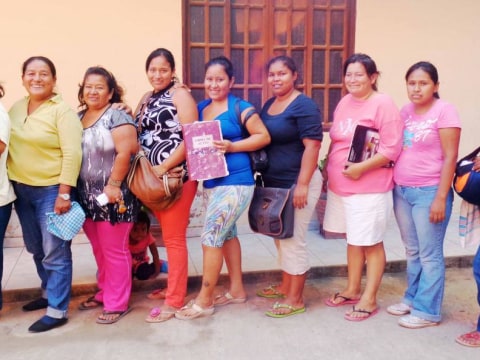 A loan helped to buy flour and other ingredients wholesale to increase production and reach more customers.

Isabel, 49, is married and has three children, ages 23, 15, and 13. Her business is a bakery. She's independent, enterprising, responsible, and hardworking, and she's a good mother. Isabel carries out her business in the Plan 3000 zone, an area known for cultural diversity. Area ethnic groups such as the Ayorea people and miners relocated from the western part of the country settled in the area, as did families affected by droughts, poor Bolivians, Colla people born in the most remote corners of the country, Guarani people, and Chiquitano people, among many other ethnic groups. The climate is warm and tropical, with an average temperature of 30 degrees centigrade throughout the entire year. Isabel is dark and of average height, and has black and gray hair (the first one on the left, with blue pants and a yellow blouse). Her native language is Guarani and she speaks Spanish for business. She lives with her three children because she's separated from her husband. They live in their own house, which is made of brick, and have potable water and electricity. The need to earn a better income to feed her family led Isabel to form a bank with people with businesses--such as mobile phone sales, chicken meat sales, flower sales, tea service, tailoring, and making empanadas--to request a loan and prosper in their businesses. Isabel's business is a bakery. She started a home business selling cakes more than two years ago. She's still a home business but is more organized. In the beginning sales were scare, but they have increased. It's still a micro-business. A close family member is diabetic, so little by little she developed specialized products for diabetic; that way they don't feel excluded and they can enjoy the celebrations. For this Christmas she has her now-traditional Christmas cake--with fruit, raisins, walnuts, plums, coffee, and rum! But she's also making low-sugar cakes and gluten-free cakes. Her dream is to expand her business and fulfill wholesale orders from stores, markets, and supermarkets. For those reasons, Isabel's requesting a loan to buy flour and other ingredients wholesale to increase her production and reach more customers. This is her third loan sequence with the institution in the two years she has been in this business.