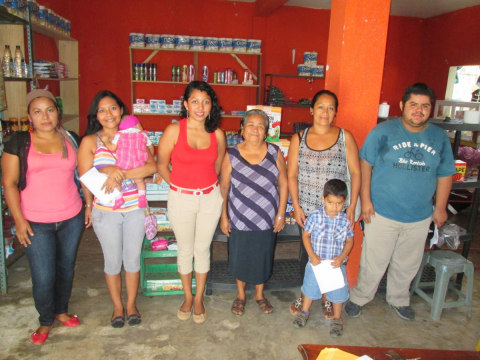 A loan helped to buy blouses, pants, skirts, and some footwear requests from her customers.

La Guadalupe Group is located in a sugar-cane region. In a matter of days the sugar-harvest season begins for processing the cane in some of the "ingenios" (sugar mills), which are also located in the area: one of them about 20 minutes away, another about 30 minutes, and some an hour or two. Fortunately the factories are a source of employment for the residents; others work in the fields growing, maintaining, and cutting sugar cane to be processed. The group members are Leticia, chicken sales; Maricela, clothing sales; Mercedes, catalogue sales of footwear; Irma, food sales; and Luis Felipe, catalogue sales of footwear. Diana, 19, is also a member. She's the mother of a six-month-old baby girl. She has worked selling clothing for a year. Her mother-in-law got her started in the job because she has a retail space. Diana helped her in the beginning, but later she decided to set up a space in her house to have her own business. Six months ago Diana decided to expand her products and started making catalogue sales of footwear. With her profits and the salary her husband earns, they've saved money to start building the family home. Diana wants to invest in blouses, pants, skirts, and some footwear her customers have ordered. La Guadalupe Group is grateful to VisionFund for the wonderful opportunity to grow with their businesses and their families. Diana's wearing a red blouse in the photograph.