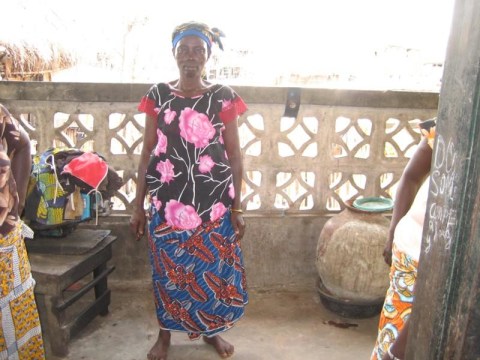 Born around 1963 in Hetin Dogodo in the township of Dangbo, Mrs. Julienne K. is married and the mother of 4 children, of whom two are enrolled in school. She is a farmer in the village of Hetin Sota in the valley of the Ouémé River and is a member of the group GF Djidjoho of Hetin Sota. She also sells drinks and cookies.

The inhabitants of this village work as farmers when the river level is low. Their land is rich and gives them a good harvest. Their principal crops are maize (corn), hot peppers, vegetables, okra, tomatoes, and manioc which are staple foods in Benin. The problem for these people who dwell along the river is that when the river is in flood, they have no more work and spend all the money they earned during the last farming season on foodstuffs. When the waters recede, they have no money left to pay for laborers who are indispensible to them in sowing their land.

The custom of borrowing against the new harvest does not make them more secure and indeed leaves them worse off. They sell their future harvest at a laughable price to weathier persons so that they have the cash needed to do their farming. Weary of this practice, Julienne K. has requested a loan of 110,000 F CFA which will allow her to farm about 1.5 hectares, growing some of the aforementioned crops.