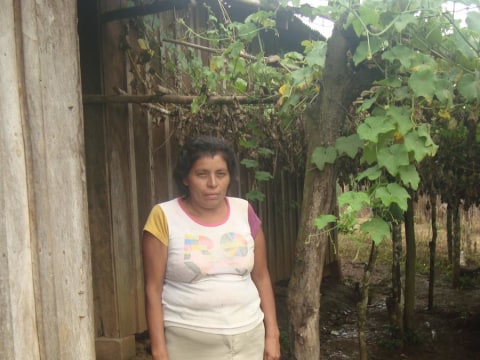 Lucía Del Carmen's loan finished fundraising, but these other borrowers need your support

A loan helped to buy a solar system.

Lucia was born in a community called Kilambé in 1970. When she was two years old she moved to another community called Sapote. She lived there for eight years on a farm that her father had. However, she later had to move with her mother and her siblings to another community named Chamarro. This is because her father abandoned her mother and her nine siblings. This happened during the time of the civil war in Nicaragua. Lucía remembers that it was a very hard time because an armed group entered the farm where she lived and burned the house. Years later they overcame this. Now Lucía is marred to Francisco and they have five children. They live on a farm and grow basic grains and cut coffee, which provides their source of income. Lucía and her family live in a community that does not have commercial energy. That is why solar energy is the only solution to be able to have light and charge her cell phone in order to communicate. Lucía wishes to install a small solar system at her house to be able to give her family a better quality of life.