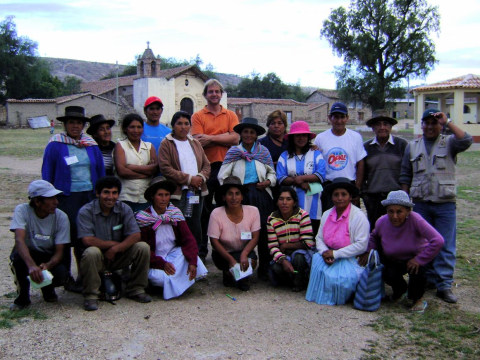 The Santa Barbara Village Bank consists of 20 members, most of whom are women. The group is part of FINCA Peru’s Wari Project, an effort to proviD. microloans to people who live far from FINCA’s Ayacucho office by sending loan officers out to the villages in which the clients themselves live. Fourteen group members live in the village of Santa Barbara, while six live in the neighboring villages of Huaynacondo and Ñeque.

The group members are involved in a variety of businesses, but the most common economic activity is raising guinea pigs, or “cuyes,” a Peruvian delicacy. Some clients have just a few dozen guinea pigs, while others have many more. Gloria Susana, for example, has almost 500 guinea pigs, breeding, raising, and selling them to stores, restaurants and individuals to prepare.

Guinea pigs are very delicate, temperature-sensitive animals, so caring for them is quite labor-intensive. Many clients go out themselves at 4 or 5 p.m. each day to cut fresh alfalfa to feed them. Some other group members raise different animals, large and small, such as chickens, cows, and sheep, which they then fatten up and sell at livestock fairs.

Other group members sell dry goods and grains; many travel between Santa Barbara and the city of Ayacucho (which is about an hour away by car) to buy, sell or traD. their wares.

Most of the members plan to use their loans to buy more merchandise to sell, more young animals to raise, or more materials to make their products. Ambrosio, for example, buys seasonal local produce which he loads into a rented truck and brings to the city of Lima to sell. Right now, it is prickly pear season, so he will use his share of the loan to buy boxes of prickly pears. Leonardo is a basket-weaver, so he will use his loan to buy more reeds to make his baskets. Leonarda has a small store and also raises guinea pigs; she will use her loan portion to buy rice, sugar and soda to sell.

The group is pictured along with their loan officer, Hector (far right) and the Wari Project supervisor, Derek Visser (center).