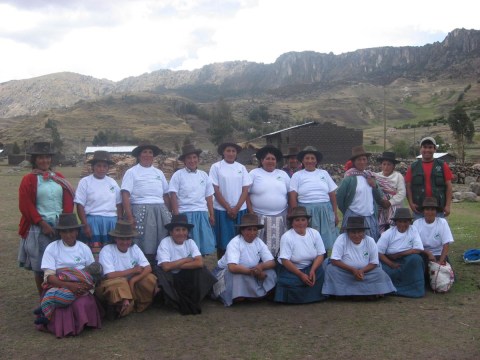 A loan helped To buy bread, cheese, clothing, and hens.

The Hatun Tarpuy ("Big Planting") Village Bank is located in the Yaruca community, in Huamanga Province of Ayacucho District in central Peru. The Yaruca community is 3,200 meters above sea level and has a frigid climate, so the only local crops are potatoes. It is located on the left bank of the Vinchos River, and has a school for young children as well as an elementary school. Most of the village raises livestock, while some farm. Commerce is restricted to markets, where animals are bought and sold.

Benedicta and Marcelina are two members of the Hatun Tarpuy Village Bank:

Benedicta is married with four children who are 10, 8, 5 and 3 years old. Benedicta used to sell coca leaves to local farmers and travel to Nazca to sell coca and dried cactus plants, which she sold to be turned into dye. Today, she sells prepared meals in the marketplace and, thanks to loans from FINCA Peru, has been able to buy more utensils and serve more meals. She used to have to rush her clients to that they would finish eating and return their dishes, but today they can eat at a relaxed pace.

Benedicta plans to use her Kiva loan to buy bread, cheese and clothing to sell in the market. She dreams that her children will someday graduate with professional degrees, so as a start she wants to take them to the city of Ayacucho to get an education. She is saving for their sake and to be able to deal with any difficulties that might arise along the way.

Marcelina is married and has eight children ranging in age from 23 to 4 years old. She launched her business six years ago selling meals in local markets, and today she buys chickens, cheeses and cows to sell in Ayacucho and also owns a dry goods store. She says that her business used to be small and it was very difficult to work with so many children, but things have improved since then.

She plans to use her loan to buy more hens to take to Ayacucho and more merchandise to sell in her store. Her goals for the future are for her children to grow up to be working professionals and for her business to grow more. She is saving up to pay for her children’s schooling.