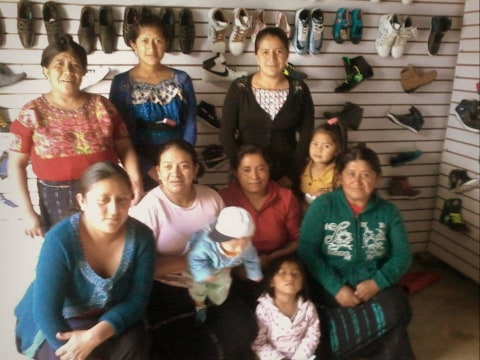 A loan helped to purchase medicine to sell.

Nahualá is a bustling, small, rural town on the Pan-American Highway in the highlands of Guatemala. The highway is often filled with 'chicken buses' that are renovated American school buses, transformed into colorful art projects and packed full of people and, sometimes, their chickens! Nahualá is the hub of the area, as nearly all the population lives on the outskirts of the town. The vast majority of the population speaks the Mayan dialect of K’iche as their first language and, to a lesser degree, Spanish. Most of the adult population has had little or no education. The people do not have many ways to support themselves and there is a dire economic need. Friendship Bridge is a vehicle of hope for seven ladies in the Trust Bank's 'Esmeraldas Nahualá Group' or 'Emeralds of Nahualá.' Previously, Juana was featured. She needed a loan to purchase yarn for her textile business. Many of the women in the town have textile and handicraft businesses. Juana reports that she has made wonderful progress in her business and was most grateful for the loan. For this report, we would like to introduce Francisca, who is a 40-year-old mother of two children and about to begin her second loan cycle. Francisca is a nurse and also sells medicine. She is requesting a loan to increase her inventory of medicine, to meet the demand. She is bilingual and speaks both Spanish and K’iche. In addition, Francisca is from Nahualá and well-acquainted with many in the town. Her dream is to create more income and open her own pharmacy. The seven ladies of the Trust Bank's 'Esmeraldas Nahualá Group' have enjoyed the participatory educational components of their monthly meetings when a Friendship Bridge Loan Officer shares useful information that affects the daily lives of the women. Some topics covered include hygiene, nutrition, health, and self-esteem. The Microcredit Plus Program of the organization, that combines small loans and education, has proved itself to be an effective way for the women to empower themselves and eliminate poverty. Last January, the ladies received a loan through Friendship Bridge, generously funded by Kiva investors. The women report that the loan has been paid back in full and on time. Because of the progress that the women have made, the Trust Bank is applying for a second loan.