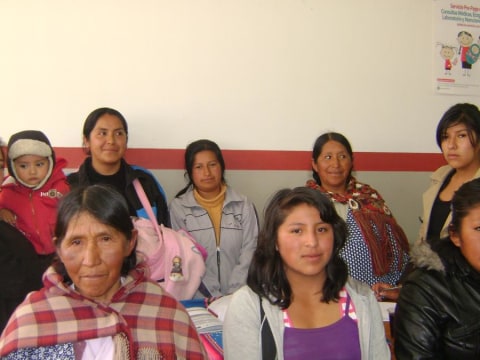 A loan helped to buy vegetables.

The communal bank the 'Muchachitas de Oro" (Golden Girls) are about to start their twenty-first loan cycle as part of the Pro Mujer Regional Office. The group is made up of eight members and is governed by a board of trustees with Natividad as the president. The members run a variety of businesses in the following fields: selling cosmetics, selling vegetables, buying vehicles, selling gifts and selling replacement car parts. The loan they will take out will benefit small micro businesses that Natividad is involved in. She tells us that she has been a member of Pro Mujer for eleven years after being invited to join by an assessor from the institution who paid her a visit at home. At the moment she runs a business selling vegetables; she makes it publicly known that she started this business using the first loan that she got from Pro Mujer, the same loan which helped her to start a separate business. At present she has a permanent stall and sells wholesale goods. The loan that she is now taking out is to buy a bigger stock of vegetables from the wholesale farmers in the city of La Paz which she will later sell wholesale in the city of La Paz. This type of work allows her to make an income to support her family economically. She is married and has three children. When she is asked what she likes about Pro Mujer, she says that she likes the health service, training and loans offered by the institution.