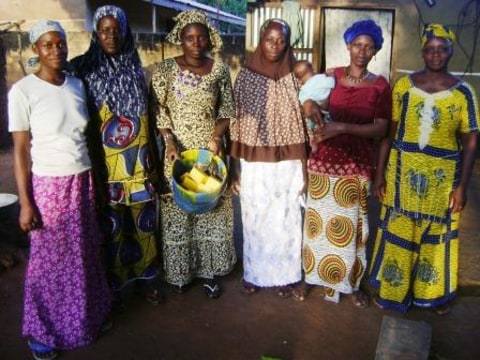 The BENKADI group is composed of 6 married women who are, on average, 38 years old and have four children. They lives in traditional extended families in the TORAKABOUGOU neighborhood in the city of Bougouni. They met via links of neighborhood, friendship and commercial activity. In order to reinforce their financial capacity and increase their commercial activities, they adhered to the microfinance institutino Soro Yiriwaso and are asking for their sixth loan. All previous loans were correctly reimbursed. These women are involved in the sale of soaps, as seen in the photo by Mossokoura (third in the photo from left to right). She plans to purcase, with her loan, 7 cartons of koulikoro soap from the wholesalers in Bougouni. She sells the soaps individually in the market and from door to door, for credit or cash, to a mixed client base. She hopes to earn a monthly profit of 20 000 FCFA which she will reinvest in her commercial activity and use to reimburse the loan. .