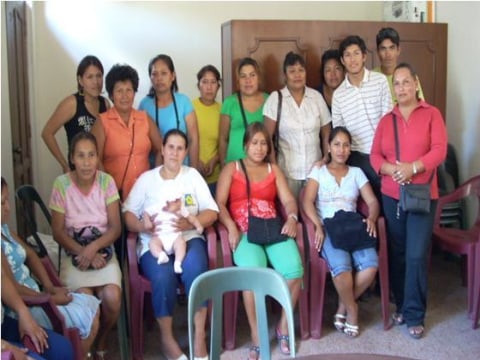 The Banco de Emprendimiento Loma Linda (“Loma Linda Undertakings Bank”) consists of members who live in the Loma Linda neighborhood of the city of Santa Cruz, Bolivia. They are currently in their third loan cycle and have 15 members. The bank was founded on December 5, 2007 by a group of women which included the president, Mrs. Lidia M. R., the treasurer Mrs. Angelica L. Mejia, and the secretary Ms. Adriana A. S.. The women in the group work selling cosmetics, food, groceries and bread, and most of them have general stores. They meet on Fridays at 3:00pm at the Emprender South Agency. The women are happy to work with Emprender because they have learned to save money and are able to get together with their friends every two weeks. When the group was started, there were 12 people. Two of the members left for personal reasons, and then 5 more members joined, and the group until now has been fulfilled.

Mrs. Lidia M. R. is the president of the group, and works making homemade bread. She has done this work for three years and works 8 hours a day. She has 3 children who are all still in school. She is a very responsible woman and is fulfilled in the group, and she is one of the founders and the leader of the group.

Mrs. Angelica L. Mejia is the treasurer of the Banco de Emprendimiento. She has a grocery store in her home and sells clothing. She has 4 years of experience in this trade and works 6 days a week and 8 hours a day from her home. She is also very responsible and fulfilled in the group. She has her own home and has lived in the neighborhood for 4 years. She has three children who are studying at the university and the income she receives helps maintain her household.

Ms. Adriana A. is the secretary and has a small store in her home. She makes homemade bread and for the most part works from home. She rents her home and also studies at the university.